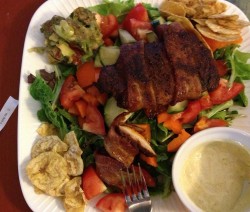 The inspiration for this recipe came from Diane Sanfilippo’s cookbook Practical Paleo.  She has a recipe in which she bakes bone-in chicken thighs that are wrapped in bacon.  What is not to love about that?!  I have made this recipe at least three different times at this point – with bone-in, boneless/skinless, different spice rubs, etc.  The biggest difference in the most recent preparation of this recipe was my handling and preparation of the bacon.

If you watch Chopped on the Food Network, you have probably heard comments from the judges that the only bad thing you can do with bacon is undercook it.  I love bacon – but I just can’t stand when it is limp and the fat isn’t crispy.  If you’ve ever tried a recipe that has something wrapped in bacon – like asparagus – it is often difficult to cook both the bacon and the other item properly.  I have experimented with center cut (which tends to have a lower fat ratio to the meat) in addition to a variety of other cuts.  The best way I’ve found to combat soggy bacon is to par-cook it a little.

By microwaving the bacon for a minute or two on a special bacon tray, it allows some of the fat to rend out.  Just that little bit of time starts the cooking process enough so that after the 45 minutes that the chicken cooks in the oven, the bacon should be perfectly crisp.  The amount of time in the microwave will depend on the power of your equipment, so start by doing 30 seconds on HIGH.  Keep doing 30 second intervals for 2-4 times or until the bacon begins to crinkle.  This process also gives you the bonus of extra usable bacon fat!  You can pour the fat out of the tray to add to the bottom of the baking pan or save it for later dishes.

The spice rub that I made looks really dark, but it is not too spicy!  I promise!  The paprika adds color, a slight sweetness, and depth of flavor.  It is a smoky rub that you can tweak to fit your tastebuds.  This chicken is flavorful, juicy, and pairs extremely well with a fresh salad, some Paleo Sweet Potato Fries, or on its own.  I recommend choosing the thighs off the bone because it is much easier to eat that way!  No matter what cut of meat and spice rub you use, this dish should become a quick and easy staple in your repertoire.