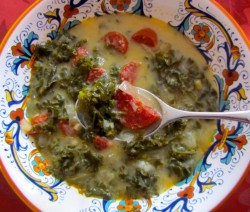 The inspiration for this recipe was the year my husband and I spent living in Brazil.  Like many aspects of Brazilian culture, this dish originates in Portugal.  In Portuguese, the dish is called caldo verde, literally meaning green broth.  Kale is the green element of this soup, and it’s supporting players are traditionally chorizo (yum!) and potato.

When my husband and I first moved to Brazil, we were living out of a hotel for a month while we found a place to live.  For a couple that doesn’t eat out frequently, it was both a curse and a blessing to have to eat out for every single meal.  However, one of the best ways to get a feel for a new city and culture is through its cuisine.  So, on the streets of Rio de Janeiro in the height of summer, I opened my first menu and let the adventure begin.

I am a big fan of chili, soup, and stew as you may or may not recognize from the amount of related recipes on my blog.  I always take a moment to scan that section of a menu when I go out to eat.  With chili, if I see it listed on almost any menu, I order it.  I even have a place in my heart for the chili at Wendy’s (please withhold your judgment).  During our first meal at a small restaurant next to our hotel in Copacabana, caldo verde caught my eye.  Kale and chorizo soup?!  It sounded amazing, and it was exactly that.  From that day forward, if I saw caldo verde on the menu, I ordered it.

Paleo and many dishes in Brazil would be considered incompatible.  Much like this caldo verde (i.e. portuguese kale soup) contains potato for thickness and texture, a typical dish would come with a side of rice, french fries, and a side of veggies that always contained steamed potatoes.  However, a quick fix for substituting potato is cauliflower!

As would be expected, there were many different versions of caldo verde.  In some the potato was kept chunky, and in others it was puréed for a creamier broth to highlight the texture of kale and chorizo.  I used the latter as inspiration for my paleo portuguese kale soup.  Using an immersion blender gives you the ability to control the texture beautifully, and I chose to blend the cauliflower completely with the chicken broth, coconut milk and water.

I used unsalted chicken broth in this recipe because the chorizo adds plenty of salt and depth of flavor to the soup.  However, seasoning is absolutely an element you can easily control for your taste.  During the sautéing of the onion, instead of using the traditional seasoning of salt and pepper, I added garlic powder to the mix to amp up the garlic flavor.  The amount of black pepper is also something you can easily adjust.   I used 1/2 teaspoon and then served each bowl with a little extra cracked black pepper on top.  It adds a spiciness that doesn’t overpower the dynamic flavors of this relatively simple soup.

What type of chorizo should be used?  The choice of brand is yours, but make sure that it is a Spanish style chorizo that is dried and cured like pepperoni.  I’ve made this soup with the Goya and Daniele brand of chorizo.  Both were delicious, but the latter was my favorite.  Pro tip: Before attempting to dice the chorizo, make sure you peel the ‘skin’ or casing off the outside of the sausage.  That simple step will make it much easier to cut and easier to eat!

Speaking of easier to eat: traditionally, the kale is diced very finely.  I used a pair of kitchen scissors to aid in cutting the kale into manageable pieces.  The smaller the pieces, the quicker the cooking time.  Another way to cut time investing in cooking: buy a 16 ounce bag of kale that is pre-washed and cut.  It will still take a few minutes to remove the large stems and cut the leaves into smaller pieces, but the slightly higher cost over the large bunches of kale is worth not having to mess with sand removal on the big leaves.

When I made and tasted this paleo portuguese kale soup, my first thought was: nailed it!  Whether or not you are familiar with this dish, I hope the flavors bring you to a place of happiness.