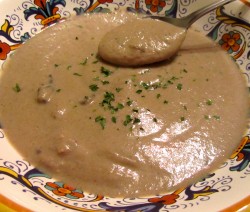 As I’ve said before, all the recipes I’ve put on my website are ones that I find fail-safe and delicious.  I certainly can’t single out every recipe as a favorite, but this soup is way up there on my lists of dishes that I love and can’t wait to make again.  Many inspirations for my recipes come from chefs on the Food Network.  In this case, my inspiration came from Chef Anne Burrell’s mushroom soup on Secrets of a Restaurant Chef.  Her version seemed simple and included BACON (yay!).  However, her recipe also included variety of mushrooms that are not readily available, as well as butter, heavy cream, potatoes and flour.

My solution to Paleo-ifying this recipe?  Roasted cauliflower started as a perfect substitution for the potatoes as a thickener!  The cauliflower added an incredible dimension of flavor in addition to thickening the broth without flour or potato.  I used full-fat coconut milk to substitute for the cream, and coconut oil to cook all of the veggies.  I also decided to use white mushrooms that were pre-sliced and washed, due to their widespread availability at any grocer.  Hello timesaver!  The only reason this recipe is considered Primal instead of Paleo is that I decided to keep the element of alcohol.  I used masala wine, but this dish would also work very well with a dry sherry.  If you want to go Paleo, I’m confident that you could omit the alcohol without sacrificing too much flavor.  Remember – there is bacon!  🙂

I used my Vitamix to blend the components of the soup and create a decadently rich and smooth broth consistency.  An immersion blender would also be able to create a similar texture without dirtying more dishes.  Just like Chef Anne, I set aside a portion of the mushroom mixture before blending to stir back into the soup to provide a textural contrast.  Speaking of textures, it would also be delicious to crisp up some extra bacon to sprinkle on top of the soup when you serve it.

This soup is a meal on its own, but can be served as an accompaniment for practically any meal.  I think the next time my husband throws some steaks on the grill that this will be the winner side dish.