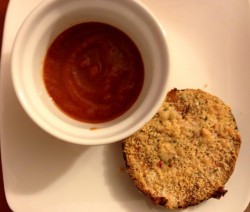 This is possibly the best thing I have ever made.  I’m not saying that just because I love the show “The Best Thing I Ever Made” on the Food Network.  That being said, I have never been so proud of a food product before in my life.  The inspiration for this recipe came from Sandra Lee’s recipe for baked eggplant parmesan.  I planned on pretty much following her recipe to the tee, except for making it gluten free by exchanging the flour and bread crumbs with coconut flour and almond meal.  She bakes the eggplant, overlaps the slices in two rows, then broils them, covered in marinara, mozzarella and parmesan cheese.  I was initially intrigued because her version is healthier than the original due to a baked rather than fried eggplant.  However, I decided that even though her version is also less complicated than the original, I wanted to simplify it even further.

Since the baking process created perfect little crispy discs of eggplant, I decided that I did not want to pour sauce and cheese on top and let the product get mushy.  They just looked so perfect right out of the oven!  My result was a deconstructed eggplant parmesan.  I did not even want to put parmesan in the title because I used so little, and you could easily eliminate cheese altogether to make the recipe Paleo.  I cut down on most of the cheese in the original recipe by omitting it from the breading mixture and leaving out the mozzarella entirely.  I only ended up putting about a pinch on each slice when I broiled them.  If you decide to go strict-Paleo and make them lactose-free, just make sure to add a touch more sea salt on top of each slice.  Even though Taylor and I are big eaters, I wanted to make sure that the leftovers would have the same crunch.  By serving a little dish of marinara on the side, these discs are not only fun to dip, but the eggplant also maintains its crispy integrity (even for the next day!).

This recipe is so fun and easy, even kids could help create these impressive eggplant dippers.  I paired them with a delicious organic tomato sauce, so feel free to use the brand that I did, or create your own pairing.  They are perfect for company, appetizers, or entrees… I even ate one cold right out of the fridge (please don’t judge me).  Even as I write this, I have two eggplants sitting in my kitchen, and I can barely wait to slice them up and make this recipe again! 🙂