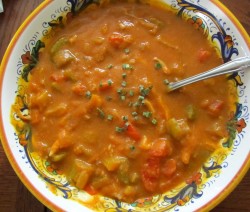 This recipe is one of the first posted on my website.  It remains one of my favorite soup recipes to this day, and can be enjoyed in any season (just make sure you stockpile canned pumpkin in the Fall)!  When I made this recipe recently, I was going from memory.  I only checked my original recipe towards the end of the cooking process to ensure that I didn’t forget anything.  What I discovered was that I did a lot of things differently, but the essence was the same, and the result was just as delicious as I remembered.  The alterations I made were a result of ingredients that I had on hand, and a few shortcut techniques that I used because I am now a fulltime student.

Even though the original recipe was convenient because it was made in my slow cooker, sometimes I would just rather put about an hour of work in, and have the results of my work immediately in my tummy.  After deciding that I was going to use my dutch oven to cook the soup, I omitted the carrots because they benefit from longer crockpot times.  Instead, I bumped up the quantity of bell pepper which has a relatively fast cooking time.  Also, I did not have any fresh ginger, so I substituted powdered ginger.  This is not only an adjustment of convenience, but one of quality control as well.  In previous posts, I have mentioned that the quality of fresh ginger can vary drastically.  Some ginger is too hard, too dry, too strong, too fibrous (you name it, and I have encountered it).  Additionally, rice vinegar is something that I did not currently have in my pantry, so I simply omitted the ingredient altogether.  I also forgot the half cup of coconut milk entirely, but the creaminess is still there because of the pumpkin and peanut butter (and who wants to open a can of coconut milk for only a half cup?).  Finally, the small amount of lime juice compliments the overall flavors without making the soup too tangy.

As I mentioned in the original, you can save yourself time and a step in the cooking process by using cooked chicken.  It can be leftover chicken, canned chicken breast, or my personal favorite- rotisserie chicken from Costco or Sam’s that has been pulled off the bone.  With the rotisserie chicken,I often peel off the skin, but if there are some delicious crispy pieces feel free to include them in the soup.  I use about 2 cups of chicken that has been cubed, but you can use more or less.

I hope that between this recipe update and the original, there is an appealing option for you to try this dish.  It’s flavors are fairly complex for the simplicity of the ingredients, and it makes enough soup to last several meals (at least for two adults with healthy appetites).  It is also a great way to bring pumpkin into savory recipes and a fun take on leftover chicken.  Buen Provecho!