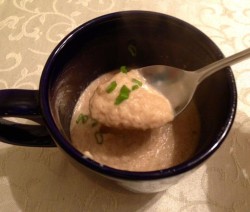 A thick, creamy soup is definitely an indulgence that is welcome in the winter months, or to be enjoyed in an air-conditioned room. 🙂 Usually, potato leek soup is thickened with cream and, well, potato.  I had leeks in the fridge for another recipe when I came across a potato leek soup recipe on copykat.com.  I decided that I wanted to substitute the potato for cauliflower, and coconut milk for the heavy cream.

The results were awesome!  There are very few ingredients, and the preparation is extremely simple.  No matter what tools you have in your kitchen, you should be able to whip this up in 20-25 minutes.

I steamed the cauliflower in a large spaghetti pot with a self-contained strainer.  I only filled it a third of the way with water, so the florets weren’t completely submerged, just steamed.  It only takes six minutes to get the cauliflower softened enough to blend with an immersion blender or Vitamix  You could also place the florets in a large bowl, drizzle water over them, and microwave for 4-5 minutes (depending on how powerful your microwave is)

I used a Vitamix, so I added all the ingredients into it, starting with the liquid, and ending with the crispy bacon and leeks.  I waited to blend the ingredients until they were close to room temperature (so the steam wouldn’t blow off the lid), so I poured it into a large pot and simmered it for a few minutes to bring it up to temperature and meld the flavors.  By crisping the bacon and leeks in a separate skillet, you have the ability to control the amount of bacon fat you have in the dish.  I used a slotted spoon, and left about a tablespoon of bacon grease to be used for eggs the next day.  If, however, you have a handheld blender, you can crisp the bacon and leeks in a large pot, then add the chicken broth, coconut milk, steamed cauliflower, pepper, and bring up to a simmer (5-10 minutes).  Then use the immersion blender until smooth.

No matter what method of preparation you use, the flavors will still be deliciously pronounced and satisfying.  Taylor said he felt like he was eating a loaded baked potato soup.  I even suggest crisping up another slice of bacon to crumble on top to provide a crunchy textural contrast.  For so few ingredients, the flavor is big and bold.  I hope you enjoy this soup as much as we did!