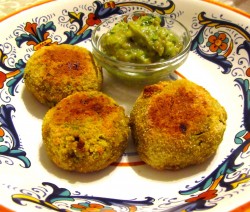 The inspiration for this recipe occurred when I came across a falafel recipe in the Penzeys’ Spice catalog.  I had made falafel a few years ago with a recipe that I found in Cuisine At Home magazine, so I saved the recipe from Penzeys in order to compare the two.  Even though falafel is a Middle Eastern dish, it has similar flavors to Mediterranean cuisine.  When I lived in the Seattle, Washington area in 5th and 6th grade, my Papou (Grandpa in Greek) visited and we ate at a restaurant where I had my first ever falafel and Turkish Delights (a jelly-like candy typically coated in powdered sugar and flavored with rose water).  I remember loving the mixture of cool and refreshing tzatziki (one of my favorite condiments) with the slight crunch and warm pillowy insides of the falafel.  It is a hearty and satisfying dish, even for meat-eaters.

There are many variations of the ingredients in falafel, but they are typically made of chickpeas and then fried.  The recipe that I made a few years ago for Taylor and me was baked, so when I came across the falafel recipe in Penzeys and saw that it was fried, I was certain that I could take ideas of ingredients from both recipes, while adapting it to be Paleo.

Chickpeas are not Paleo because they are a legume.  I still enjoy hummus occasionally (made of mashed chickpeas) with fresh veggies, but I wanted to recreate the food memory of falafel in a dish that was strictly Paleo.  I had fun trying to come up with substitutions for the chickpeas, fava beans and flour.  A combination of grated zucchini, riced cauliflower, red onion, and almond meal created a deliciously moist, yet hearty base for all of the healthy spices.  I also chose to borrow a method from my Paleo Keftedes recipe, and to coat the meatballs in a small amount of coconut flour for extra crunch on the outside.  I’ve said before that I will not post a recipe that was not immensely successful in my kitchen, and this recipe was a home run.  I made it on three separate occasions to ensure that I had the ratios of ingredients and flavors down to a science.

Not only is this dish healthier because it is baked with a small amount of organic olive oil instead of fried, but it is also full of veggies and healthy herbs like turmeric- an herb known for its anti-inflammatory and antioxidant properties.  Traditionally, falafel is made with a lot of fresh herbs, but I substituted dried, and they still came out moist and flavorful.  I created my Avocado Tzatziki to serve with them, and the combination brings me right back to that restaurant in Seattle with my Papou.  Taylor and I have enjoyed this as a meal and a snack, from breakfast to dinner.  I hope you enjoy these flavorful vegetarian meatballs as much as we did!