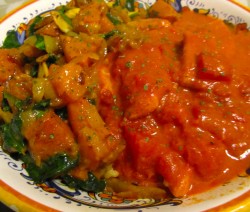 Chicken Tikka Masala was literally the first Indian dish I ever ordered at an Indian restaurant.  Although it was not a very adventurous choice, it acted as a gateway to my love of Indian food.  A simple chicken dish of tomato and a touch of cream, it tastes decadent without being too rich.  There are probably many variations of Tikka Masala recipes, but my inspiration was Chef Aarti Sequeria’s Chicken in Creamy Tomato Curry Recipe.  Always on the lookout for Indian dishes to make Paleo-friendly, I made this shortly after watching her make it on the Food Network.

I bought boneless, skinless chicken breasts that came thinly sliced.  You can use regular chicken breasts or chicken thighs.  Chef Sequeria used chicken thighs in her recipe.  No matter which cut of chicken you use, by searing them in a grill pan then finishing the cooking process in the sauce, the meat becomes tender and the flavors are perfection.  I only seared the thinly-sliced breasts for about a minute on each side.  If you are using thicker pieces of chicken, you can sear them for longer to achieve color on each side.

I made very few changes, the main ones being the base of my tomato sauce and the substitution of full-fat unsweetened coconut milk to replace the heavy cream.  She had used fresh tomatoes as the base of her sauce, but I did not have any on hand.  I am lucky to have found a few organic diced tomato options in both cans and boxes that I keep in my pantry.  This time I used the Organic Muir Glen brand of diced tomatoes in a 28 ounce can.  Using preserved tomatoes is a great way to make any last minute dish idea a reality, especially in the winter when good fresh tomatoes are harder to find.

In the original recipe, the directions are to make the sauce smooth.  I decided to omit this step because the sauce was not overly chunky, and I thought the texture made it more rustic and hearty.  Not only would that process have dirtied another piece of kitchen equipment, but it was also another step preventing me from tasting it!  If your preference is a smooth sauce, then make sure you either transfer the sauce to a Vitamix or blender, or use an immersion blender before adding the chicken.  Either way, the flavors will still be mouthwatering!

I served this dish with my Paleo Southern Indian Squash Curry recipe.  It was a perfect pairing along with my Cauliflower Rice.  I added a pinch of saffron to make it reminiscent of saffron rice.  Both dishes took me less than two hours to make, and it was one of my favorite dinners to date!