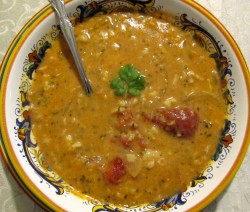 The latest and greatest news for our little family of two is that we are moving to Rio de Janiero, Brazil, this coming January.  It is the beginning of many adventures in Latin America for the rest of my husband’s career.  I add this bit of info because hopefully it is the first of many recipes to come that will reflect the various regions and their associated flavors that we will encounter during our time in Latin America.  As you may have noticed in my previous recipe write-ups, I am all about creating dishes from a variety of cuisines.  I hope that our experiences will not only improve our lives (in the way of nourishment and culture), but also yours as well!

This recipe was actually a recommendation from one of Taylor’s Portuguese language professors for a traditional Brazilian fish stew dish known as “moqueca.”  There is nothing like a recommendation from a Brazilian about Brazilian cuisine, so we had to try it!  When I googled “moqueca” for recipe ideas, I came across one from Emeril Lagasse that looked promising.  I am embarrassed to admit that I had no idea he had Portuguese roots.  With all of the hours spent watching Food Network, I only gleaned that he was from Louisiana and known for Cajun-style cuisine.  I look forward to researching more of his recipes to see if I can find more inspiration!

I used a mortar and pestle to smash the garlic (as shown in the pictures above).  Before you leave this page and forget this recipe, this tool is (1) certainly not mandatory, (2) super cheap (and I’ll be honest, I was super excited to use it).  You could use a handheld garlic press, or simply mince it by hand.  The garlic will get a quick saute in the pan then be blended with oil, so it’s original form is not as important as using fresh cloves.  I normally save time and money by keeping a gigantic minced garlic jar in my fridge, but it was worth it to buy fresh garlic for this recipe.  However, if you somehow find yourself with all the ingredients except for fresh garlic, let me know if it is still delicious.  After all, sometimes a little improvising is necessary.

Emeril’s original recipe required very few alterations to make this dish easy and Paleo.  Traditional moqueca is already made with coconut milk!  Most alterations made to the recipe were a matter of convenience.  I not only have coconut oil in large supply, but it is an oil that I prefer to cook with rather than olive oil.  I ended up using canned diced and whole tomatoes instead of fresh for quality control and also to utilize my pantry.  For similar reasons, I used dried cilantro for part of the dish.

This dish is traditionally served with rice.  If you are gluten free but not strict Paleo, grab a bag of Uncle Ben’s 90 second rice or take 15 minutes to boil some quinoa, and enjoy!  Otherwise, eating this with some cauliflower rice or “plain” is just as tasty and satisfying.  We ate this dish for several days, and it just kept getting better and better.  Bom Apetito!