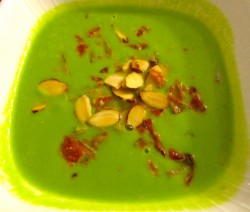 The inspiration for this recipe came from two places.  The first: Melissa d’Arabian’s Almost Raw Asparagus Soup recipe that I saw on her Ten Dollar Dinner show.  The second:  I had struggled in the past to create bacon wrapped asparagus that cooked both the asparagus and bacon well.  The common difficulty with making bacon-wrapped aparagus is that the asparagus overcooks, and the bacon does not get quite crisp enough.  When I saw the original asparagus soup recipe on television, I could not wait to make my Paleo spin on bacon-wrapped asparagus.

Asparagus are delicious, whether raw or cooked, but you must remove the hard part of the stem before eating them.  Luckily, it is extremely easy to find where the hard stem ends and the tender asparagus stalk begins.  Simply put your hand at the end of the stalk and bend it gently until it breaks off.  The point where it breaks easily will remove all of the inedible stalk.  You can use one asparagus to line up next to the others and cut all the other stalks at once with a knife, or pick up and snap each piece individually.  Either way, the process doesn’t take long!

The asparagus is not roasted for very long in the oven, so the soup retains a beautiful green color.  The touch of coconut milk is to add a bit of creaminess without making it heavy.  The original recipe used greek yogurt to finish the soup, but I think the tanginess would take a lot away from the flavors of bacon and lemon.   The bacon adds a delightful crisp, and pairs well with toasted almonds on top.  It reminds me of the green bean dish my Mom used to make that had slivered almonds.  However, the bacon and chicken broth can both be omitted and you could use vegetable broth instead if you wanted to make this soup vegetarian.

This soup can be enjoyed hot or cold.  I actually enjoyed the leftovers straight from the fridge.  I had kept the extra bacon slices that I crumbled in a small container, and just sprinkled them on top with a teaspoon of almond slices.  Even when you make it for the first time, it is optional to pour it from your Vitamix or blender into a soup pot to heat.  You could just serve it straight from the blender.  It all depends on you and your families’ taste buds!