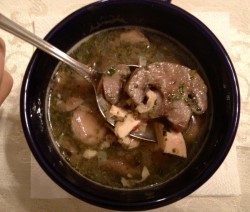 As I’ve said before, I love chili!  This recipe in particular is a variation of a southwest white chili that my Mom makes.  It can be made from “scratch” by using fresh chicken breasts or ground turkey.  But what I love about this is that it can be made into a fast, flavorful meal by buying precooked chicken!  The spices are so prominent and rich that it will taste like the dish was in a slow cooker all day.

I have trouble passing by a rotisserie chicken display without grabbing one.  Admit it, they always smell like they were slow roasted in heaven.  Even if I have meals planned out for the week, I often end up with one in my cart.  The good news?  It can stand alone as a great protein choice for dinner.  The better news?  They can easily assist you with making a recipe that would normally take at least twice as long.  The best news?  Usually they are under $7!  I can get one at the Commissary for $5.99, but got one at Sam’s Club yesterday for $4.99… and it was large and beautiful!  With that one bird, I made two delicious soups!  Please also check out the Quick Paleo Thai Chicken Soup.

This recipe was originally made with white beans.  In this recipe, I had half of a large container of sliced mushrooms left over from making a Paleo Stir Fry for breakfast.  I wanted to see if just the mushrooms with some diced onion would add enough to make it a heartier soup.  I absolutely think it works.  However, if you like, it is delicious with a can of drained and rinsed great northern beans.  I also found a can of garbanzo (chickpeas) that I believe would work really well because they won’t get as mushy as many types of beans.  However you decide to put your spin on it, I hope this recipe gives you the confidence that you can throw together a delicious and comforting meal in mere minutes!