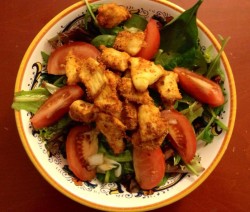 My brother’s girlfriend sent me the inspiration for this recipe, and she planned on making it during their snowboarding trip.  She sent it to me because she thought it would be a good addition to my site.  She was right.  It was also perfect for our bellies.  Taylor LOVES Chick-fil-a.  We haven’t been long in Georgia, but I knew I had a winner when Taylor ate one and announced that they tasted just like Chick-fil-a.  We all know that fast food nuggets aren’t great for you, and the thedomesticman.com website gives the list of ingredients, which include so much “stuff” besides chicken breast.

The original recipe was a great start, but I made a few changes.  To make it Paleo, I substituted coconut milk for the cream or buttermilk that was in the original recipe.  The original recipe also called for tapioca or arrowroot starch, and though gluten free, the former is not Paleo.  I was confident that if I followed the same steps, but substituted the starch for coconut flour, the “breading” would end up the same.  I decided to use coconut flour instead of almond meal because it is finer and less fluffy.

However, the biggest difference between the original recipe and my own was the cooking process.  I was not keen on frying the nuggets in coconut oil.  Even though coconut oil is much healthier than other oils, I was hoping I could achieve the same food memory of Chick-fil-a without frying.  I combined the methods from the crispy duck and pork shoulder that I have roasted, and placed the small chicken pieces on a parchment paper-covered wire rack.  The results were even better than I hoped for.   The outside “breading” wasn’t soggy, but crisp, and the meat was still juicy from the brining process in a little kosher dill pickle juice.

To serve: I put these on a spinach and spring mix salad with onions, tomato, balsamic vinegar and organic olive oil salad.  Taylor had them served with organic ketchup.  Any way you choose to eat them, I’m sure you will be in love!  Have fun indulging your taste buds, without derailing your diet!

A few things to note about ingredients:

I purchased thinly sliced chicken breasts.  This recipe could also use regular chicken breast filets, but they will require a few more minutes in baking time.  Just use your nose!  With such small pieces of chicken, they will need little more than the 15 minutes I did for thinly sliced breasts.

I used the original recipe’s guidelines to toss all the chicken pieces in the breading instead of doing each one separately.  This certainly made it a quick process, but understandably, that left some chicken more sparsely coated than others.  I don’t think that was a bad thing, they all had the same flavor profile.  But if you want more crunch, you could reserve some “breading” to sprinkle over the top of the chicken before baking.

A few things to note about equipment:

I used kitchen scissors to quickly and easily cut the chicken into 1 inch chunks.  It was SO MUCH better than using a knife.  I recently acquired kitchen scissors, and they can really make your life easier in the kitchen.  I purchased a set of two for less than $8 at Sam’s Club.  They even twist apart to make the cleaning process easier.  I highly recommend getting yourself a pair.  They should also help prevent the dulling of your knives if you were like me and used them to open food packaging. 🙂

I recently purchased a second wire rack so that I could use two at once.  That purchase has already paid off.  Only a 1/4 of the chicken will fit on each wire rack-covered baking pan.  By using two pans, I was able to cook all the chicken in two batches (just 30 minutes in all!).